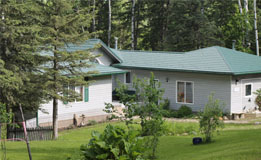 LOVE IN A PERUVIAN ORPHANAGE 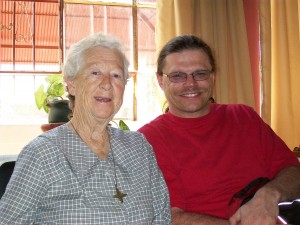 Terry with Sr. Loretta at Hogar Belen Orphanage, in April 2009

Living in Peru, in the city of Moquegua, is a most remarkable woman.  Although her name is Sister Loretta Bonokoski, her 57 children call her “Ya Ya.”

St. Loretta was born June 15th, 1931, on a farm near Torquay, Saskatchewan, to immigrant parents of German descent.  She was the twelfth of fifteen brothers and sisters.  As a child, she would tell her mother that she was either going to be a cowgirl or a nun.  On August 8th, 1948, at the age of 18, she entered the Congregation of the Sisters of Our Lady of the Missions.  As a religious in Canada, she taught in elementary schools, cooked in convent boarding houses, and cared for the ill and elderly nuns.  An excellent background for the mission that lay before her.

In 1968, she was selected to serve as a missionary in Peru.  She started her work organizing catechetic’s in the Moquegua Parish.  However, the scope of her missionary work expanded one evening when the parish priest, Fr. Francis Fahlman, a Canadian Franciscan Friar originally from Saskatchewan and herself, saw a little 9-year-old girl huddled up alone on a corner of the plaza.  It was ten o’clock on a cold night and the little girl didn’t have a jacket or anything to keep herself warm.  She wouldn’t talk, only look up with her dirty scaly face and smile.  She was brought to Sr. Loretta’s house, given something hot to eat and drink, then put to sleep.  This little girl, Rosa Flores, was the first of many children to come to “Hogar Belen” (Bethlehem Home), which is the official name of St. Loretta’s home.  Rosa is now 23 years old and is studying to be a nurse in Arequipa.

Since that time, Sr. Loretta’s home has grown substantially and has become a large family setting for people with “special needs.”  To really appreciate Sr. Loretta and her home, one should live with her – at least for a day.

Today is an ordinary school day in Sr. Loretta’s home.  Before the sixth hour, Sr. Loretta has walked through the three cramped bedrooms, has turned on the lights and has awakened her children.  Miraculously, without major hassles, the 57 children take turns using either the one full or the two half bathrooms.

Walking quietly but quickly to the kitchen – which also serves as the dining room – Sr. Loretta moves about her chores with the experience of a thousand mornings.  By 6:01 a.m., the water is boiling on the propane stove, the two washing machines are cleaning the baby diapers – every day is wash day; and breakfast is being prepared.  Today’s menu is toast and corn meal.

Justo, at the age of 13 was left to fend for himself being affected by a cancerous type of illness causing lumps to form on the lymph nodes.  After two years of abandonment and of beating the odds, he faced still another problem – alcoholism.  He asked the local parish priest for help.  It has been nine years of deceiving death and beating the odds.  Justo, though himself not well, studied nursing and is one of the Sister’s trusted helpers – always there when a hand is needed.

At 6:40 a.m., some of the smallest people in the house, Emanual, Richard, Erik and Marco, find themselves being fed.  The oldest of four, Emanual is soon to celebrate his first birthday.

After everybody else has been served, Sr. Loretta herself breaks for breakfast with Teodora Estella, an 85-year-old woman who used to be a dancer, and Justo.

At this point the house is quite: the primary school children have left for their morning classes; most of the older ones go to school in the afternoon or evening.  Sr. Loretta sends Fernando to check on Mario, one of the many children who doesn’t live in the house but who regularly eats at Hogar Belen.  He hasn’t been coming lately.   She herself checks on a crying baby.

At 8:00 a.m., all those in the house gather for family prayer.  After prayers, the breakfast dishes are gathered and washed.  The third load of clothes are put into the washing machine.

The morning passes but not without a visit from a retired school teacher who has dropped in to play with the young tots and who regularly gives gifts of clothing, furniture, and money.  Also visiting is an impoverished mother who asks if her two boys may eat with the Hogar Belen family.  They are welcomed.

The house itself is old and is made of mud bricks.  Many of the walls are falling down piece by piece. St. Loretta worries every time there is tremor.  She worries even more about the big black bug called the “chirmacha,” which thrives in walls like Hogar Belen’s.  At night, the bug painlessly draws blood from its sleeping victims’ inner organs.  Fortunately, none of the children seem to have been bitten by a diseased bug yet.

Sr. Loretta dreams of living in a new Hogar Belen, where there wouldn’t be a rat problem, water shortages, falling walls, poor plumbing, a space problem or “chirmachas.”  But dreams are for leisure time.  Right now dinner must be prepared.  At 1:00 p.m., dinner is served to the little children and to the elderly – many of whom don’t live in Hogar Belen but come to eat there.  Then diner is served to everybody else.  Sr. Loretta serves herself last as is her custom.

During the meal Sr. Loretta talks about her kids.  She points to Juanito and explains that when he came to her home it took quite some patience and love to break him of his street taught habits.  She concludes with a smile and a nod of approval, “look at him now such a nice boy!”

She also talks of Claudio and Rodrigo, two young men from her home who are in the United States receiving medical attention.  She hopes and prays for the best and speaks highly of Stephanie Williams, a lay missionary from the United States who made the medical and other arrangements that made their trip and treatment possible.

By the middle of the afternoon, while the students of the house are doing their homework, another visitor calls.  This time it’s the manager of a local trucking company  He wants to know more about the home and how his company and family can help.  Sr. Loretta answers his questions, shows him around the house and introduces him to some of the family members.  He is impressed.

The early evening is spent cleaning the supper dishes, watching TV and talking together.  Fr. Francis has come on his nightly visit.

In the later part of the eleventh hour, Sr. Loretta does the things everybody else overlooked: she puts the juice into the fridge, finds the proper place for a dirty pair of socks which had been abandoned on the floor, and shuts off the lights.  Then she, like the rest of her family before her, crawls off to sleep and awaits another ordinary day.