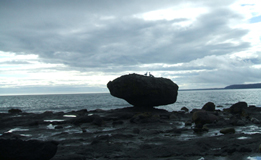 The following article is about Edward Ruben, the oldest resident in Paulatuk, NT. The interview took place on 18 December 2009. Edward and his wife Mabel celebrated their 50th wedding anniversary on 9 May 2009. This article was written by Terry Garchinski. Terry is a freelance writer who also works for Life Works Counselling and Training Services Inc. facilitating workshops throughout the NWT, Nunavut, Yukon and southern Canada.

Edward Ruben was born at Atkinson Point on May 1st 1917. Now at 92, he is the oldest resident in Paulatuk, NWT. In typical good humour, Edward says with a chuckle, “I was pretty young at the time, so I don’t remember if I was born in a tent or in a building.” Edward does remember seeing a lot of tents when he was three years old. They were a few hundred yards from where his family’s tent stood. He remembers saying to his mother, “I’m going visiting.” And away he went. Edward remembers looking in the first tent and seeing everyone sleeping. Then he went to the second tent and they were all sleeping too. At the third tent, an old woman invited him in and asked him to get her some water. “I took her a cup of water and she gave thanks to me. From there I walked slowly home, thinking. I asked my mother, ‘How come people are sleeping so late?’ And she told me that they had the flu.” Edward says, “When you are 2½ or 3 years old, you have a mind of your own. When you see something you start to recognize what you see. You are part of the world and you are making sense of it.”

“As a young man, I did everything for my parents. I felt part of the family and I contributed in ways that I could. I listened to my parents and to the old people. I hauled ice for drinking water, I cut wood and I fed the sled dogs. If I didn’t we were thirsty and cold. I was glad to have what I had. “Now, there are so many things done by machine. There is a water truck; there is a fuel truck; there are snowmobiles. The youngsters are bored. They have nothing to do. They sometimes go in the wrong direction.”

Edward believes that it is important for youngsters to have the opportunity to take responsibility and contribute to the well being of their families and community. If they don’t, they may not feel like they belong or have a purpose in life or be thankful for what they have. This can lead to many problems.

Edward is the father of 15 children. Five with his first wife, who died when she was delivering her fifth child and 10 with his wife Mabel with whom he celebrated 50 years together on the 9th of May of 2009. As a father, Edward says, “Don’t make kids scared. Talk to them softly. Even a dog that is whipped does not know what to do. When you scold them, they don’t know what direction to take. Tell them softly, help them to understand. Train them but not out of fear. Kids are not animals. Make sure they understand. Talk to them with good words and kindness.”

One problem that many people have is being addicted to alcohol or drugs. Edward says, “I don’t talk to people when they are drunk. I let it go. When they sober up, then I talk to them and put it on the line and I listen to people when they are talking.” “I did not go to residential school so I don’t have anything to say about that. I did not go to residential school because mom said that I shouldn’t and I listened to my mother. I learned to speak English on my own without going to school. If you lose your own language, you lose your power. I am happy I still got my own language. I am happy I still got a lot of power. I really respect the people in the Eastern Arctic. Even the young people still use their own language.” When things change so much it is like being caught in a storm. “You can’t stand up on your own. You need something to hang on to. The wind is a strong teacher. It makes sure you have everything. I remember being caught in a storm so strong that I couldn’t even make a snow shelter. I just had to hang on to the sled. That was hard. I’m not saying I am a good man or a good hunter. I am just as bad as the others. I had to try my best. “Each of us has to know how to take alcohol. Nobody will tell you what to do. Inuit, White, Indian, we all got a mind. We just have to go in the right direction to go ahead. To go in the right direction we have to pay attention and be aware of the signs. A family and a community need to work together as one. They need to put their good minds together and not ever think that you are better than somebody. I myself listen to old people. I know that alcohol will not lead you in a good direction. Alcohol, drugs and smoking makes us scatter in many directions. My grandfathers would say, “Grandson, it does not matter what you do or who you are, don’t think you are better than others.” “I always try my best to take the right direction.”