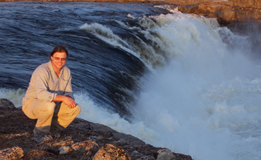 An Article on Terry Garchinski, Written by the Faculty of Social Work, U of C

Personal experience spurs alumnus on to No Ordinary Journey

In late March of this year, Terry Garchinski (MSW’14) was part of a team that went to Vietnam to support children with cerebral palsy (CP) and their families. The team was organized through the No Ordinary Journey Foundation and led by Terry’s friend Laverne Bissky of Calgary. Her daughter Kasenya has CP.

Learn more about their experiences and work in this short documentary done by a Vietnamese television station. Terry appears at about 14:30. Terry also did a short Q&A with us in between training sessions he was conducting for Inuit counsellors in Clyde River, Nunavut. (The interview has been edited for clarity and length.)

FSW: What made you decide to participate in the educational mission?

TG:  Laverne Bissky and I have been friends since we were students at the University of Saskatchewan in the early 80s. She knew that for a period of time I had worked as a personal aide for a university student in computer science and who also had cerebral palsy. Laverne also knew that I had incurred a brain injury at the age of five. So with personal and professional experience with CP, she asked me to sit on the No Ordinary Journey board of directors. I agreed because I had benefited by working in an orphanage and teaching English as a second language in Peru. I wanted to support such an international learning opportunity for other young people with CP as they advocate for those with CP and their families in countries that didn’t have as well developed social structures as Canada does. Vietnam was the first country that we chose to focus on.

When we were assembling a team of professionals to support the work, Laverne thought that a social worker would be beneficial on the team to help articulate and mitigate the negative social impacts of false judgments and discrimination towards those with CP and their families. She also believed that a social worker could support a process to encourage parent empowerment and networking. I agreed and was pleased to volunteer.

FSW: What is the most meaningful memory or experience from the trip?

TG: Vietnam is such a beautiful, diverse country. It provided so many memorable experiences, but the most meaningful experiences came when we were invited into the family homes. Regardless of wealth, occupation, language spoken or nationality, we were all equals as parents who wanted the best for our children. In one home we visited, the poverty was extreme: straw hut, dirt floors, minimal furniture but the home was full of love. In fact, an older sister chose to quit school after grade six in order to care for her younger brother who had CP. What a sacrifice! That is the kind of person that I look up to. While we visited, they offered us coconut water still in the shell cut from a tree in their field. It is hard to imagine a better tasting drink at any five-star restaurant anywhere in the world!

FSW: Why did you choose social work as a profession?

TG: I chose to be a clinical social worker because I am a good listener and enjoy listening to people’s stories. I used to get kicked out of libraries because people would come to talk to me. I have brain that works strategically to problem solve. I like to play chess and other games. I am a big picture guy who has an aptitude to take in a lot of details and create a simple, understandable picture. I am very curious about human nature and delight in our differences. I believe life is purposeful and meaningful. I believe that reality exists on many levels and contains many parts, including a spiritual part that connects all things to a loving Creator. Social work helps me to frame and manage such diversity in a way that psychology or the medical model alone doesn’t. Social work helps me to understand my life and its challenges and then to support others to understand their lives and gifts.

Thanks so much for sharing your experience with us, Terry!