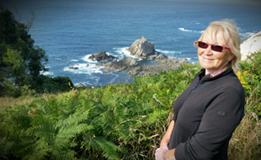 Terry Garchinski has made helping people come to terms with grief and loss his life work. Just as he and his own family were coming to terms with a very profound loss, he returned to his alma mater, Naicam School, to share with its students about his work and the lessons he has learned.

On March 1st, Terry spent a morning giving two presentations to Grades 7 to 9 and Grades 10 to 12, based on his book, I Believe. He shared with the students that he was home in Naicam because his mother was in the process of dying. After a very long and courageous battle with cancer, Stella Garchinski passed away within days of Terry’s presentation at the school.

Terry spoke warmly and informally to the groups of students, disarming them with his direct approach to a subject that most find difficult to talk about.  But he said, all of us, if we are human beings who have made attachments, have had to deal with loss at one time or another in our lives, and will deal with loss and pain again. It is what we choose to do with those experiences that will make the difference in our lives and in the lives of others.

His own, very present, situation was used as an example.  His mother had been dealing with a devastating illness for 19 years and her choices in the face of the losses the illness brought was to live her life fully. It was an experience that taught him and other members of his family to value every moment.

Terry and his wife Elaine Woodward co-own Life Works Counselling Services, with offices in Yellowknife, N.W.T. and Millarville, Alta.  Terry is a Therapeutic Counsellor and Workshop Facilitator who has been called to give workshops all over Canada, especially in the north. He and members of the Life Works team have been brought in to help communities deal with tragedies such as death due to accidents, violence and suicide.  He has also worked with people struggling to recover from family violence or alcohol and drug abuse.  However he stresses that what he does is help people to find healing from within.

He told the students, “You are the only person who can deal with your own hurt and pain.”

Terry has traveled an interesting road to his current expression of his life work. He values the roots his family, his faith and the community of his youth have given him.  He says it gave him a sense of belonging and appreciation for the safety of community.

One of his foundational experiences happened when he was a little boy playing at the town’s ball diamonds. Curiosity led to a dangerous and violent encounter with the pitching machine, which resulted in a brain injury and partial paralysis. Terry recovered but still walks with a limp as a result of the accident.  He told the students, “One thing I was told over and over again after the accident was, “You are lucky to be alive.” “And. . . I believed it.” He went on, “But you know if I’m lucky to be alive… so are you.”

That appreciation for life and all its attending joys and sorrows was expanded throughout several other life experiences.  After attaining a degree in Philosophy, Terry was drawn to teach English at an orphanage in South America. This would be an adventure by most standards without considering that he decided to hitchhike to get there. His parents later told him that when he left Naicam, they were afraid that it would be the last time they would see him.

Their fears were not groundless it was a dangerous time to travel through Central and South America, a time of revolution and lawlessness.  At one point Terry was robbed and left with $5.00 to his name.  He says that this experience, essentially an experience of being powerless, opened his eyes to the fact that for most people in the world, life was not what he had experienced in Naicam.

After teaching English in Peru for a couple of years, he decided to see for himself why so many people were homeless in the big cities of North America and what it was like to live on the street.

He told this part of his story to the students with the help of a quena, a Peruvian recorder-like instrument. This simple musical instrument became the source of his livelihood and a source of envy of other street people. He was able to buy food each day with the money he made busking, a luxury not every street person could afford. He played a couple of simple tunes for the students and explained that his experiences on the street in cities like Washington, New York and Miami gave him a greater understanding of what the world was like outside of his experience as a white, middle class male from a relatively privileged background.

After 18 months living on the street, he returned to Saskatchewan and became a live-in helper for a man suffering from cerebral palsy, while taking a degree in social work. His work in therapeutic counselling led him to Northern Canada and to his present day work.

He wrote I Believe as a tool to use in his work. It looks and reads like a children’s book but is actually a parable for adults. He invited a person from each audience to come forward and read the book aloud to their peers and he further invited students to respond to the symbolism in the book and what it meant to them.

The symbolism of the book and a message that resonates throughout the therapeutic; work Terry does is that we are all connected through human experience and that pain and loss are essential parts of that experience. Those difficult experiences can present blockages in our pathway or journey through life that keep us from experiencing a full life.

However if we choose to persist, to have faith and look to our life map or set of beliefs for direction, we will come into that fullness. He said  that he was able to take risks because of his faith and his belief that he had a “map” inside that would guide him if he took time to find out where it directed him. He encouraged the students to look for that inner direction, unique to each person.

Terry also took extra pleasure in pointing out that the models for some of the characters in the book were members of his own family – his son Thomas, his dad Frank and his grandfather. The heritage reflected in the artwork is also reflected in the message that the human connections we have in life can cause us grief and pain when they are lost, but they are also a source of healing and re-connection that can bring us full circle to a place of wholeness. This is a lesson Terry continues to learn, even as he teaches it to others.